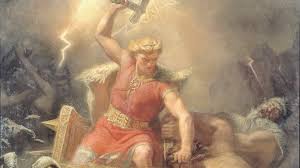 When the Vikings crossed the northern seas to England, they took their gods with them. Thor, the warrior god of thunder, slayer of giants, would have been an inspiration to the Viking warriors huddled in their longboats. The warriors came in search of plunder and glory, driven by the same instinct that made the giants of Norse mythology such a threat to the order of the world, which the gods had imposed. But even the gods themselves resembled the people they were working to protect. Thor, a red headed, hammer wielding, herculean personality, was fearless to the core — the very personification of the old Germanic warrior.

Gods are a mirror on the culture that creates them. Gods like Thor may well have been modelled on mortal beings that existed long ago, or they may simply have been the stereotypes of their day. Whatever their origins, they are all the bearers of messages from the past.

The messages come to us as stories, and every culture has its own. There may be similarities between the stories, but it is mostly their uniqueness that divides us and distinguishes us. The stories of our gods make heroes of our countrymen and demons of our enemies, and yet, in the end, all of them have one major objective in common: to make sense of the world, to understand its origin and its purpose, and to help us come to terms with our departure from it, as we bow out like the characters in a narrative once our part in the story has to end.

The world as we know it today has become familiar with the idea of one god only, but this is a relatively recent development in the overriding story of peoples and their gods. There were once many gods, and every culture had its own. Not every culture today is a one god culture; multiple deity cultures spread the burden of human expectation instead of heaping it on one; conversely, one god is supposedly more powerful than many, with all the benefits and dangers its domination must bring. The question, how did we pass from a multi god culture to a single god, or monotheist culture, is hard to answer.

I will try to suggest one during this series of posts, working on the assumption that every god, like every story, has its context, and that the context will inform us. Stories, as any writer will tell you, all arise out of a need. A story is ultimately told because it underpins that need, the need to explain or to make sense of something. Exploits and a plot will form the substance of the story, but behind these exploits the meaning of the story is the thing that gave it purpose in the first place. So what about Thor? How does he fit into the broader context of his culture, and how are we meant to understand him?

Viking culture was a warrior culture mostly dominated by men, and in fact most of the Germanic gods are male. Thor was one of Odin’s children, and Odin was the founding god of Norse mythology, the one who created the world from the body of Ymir, a destructive and terrible giant. As Odin’s progeny, Thor’s mission was to slay those giants that posed a threat to the order the gods tried to impose on the chaos of Ymir. Cosmology is at the heart of these Northern European stories, as it is at the heart of many of the stories that underpin the gods of other cultures.

Reading these creation myths, you have to wonder how these ancient peoples could have even envisaged the world and its beginnings, let alone invent the stories to explain it — stories which, although figurative, sometimes bear a striking resemblance to scientific fact.

Thor’s chosen weapon for his mission was the hammer, which betrayed the presence of the god whenever thunder rolled. The battles he fought were in essence a battle for the soul of humankind, in much the same way as the Christ of Christian mythology sacrificed himself as a saviour of the people. Violent though it was, Thor’s mission was a mission of protection, a fight against evil in the name of good Odin. To implore the aid of Thor on Earth, sacrifices were made, especially in times of shortages or famine, when the lives of Thor’s people were under threat from nature. Did the Viking god respond? In a roundabout sort of way, it could be said he did. As a people, the Vikings were ruthlessly successful. But when they raided other shores to ensure their own survival as a people, the moral cost was high.

Thousands died horribly at the hands of these invaders. Thor may have slaughtered wayward giants, but the mortal warriors that carried his hammer into battle did so for the plunder, any thoughts of good and evil being mostly disregarded. Thus the stories of the people do not always follow the narratives of their gods. Context, however, often comes to the rescue. As the battles made men into heroes, honour took the place of cruelty. Thor would have done well to note the warning: one day, if he did not keep a handle on his hammer, men might even take the places of the gods.