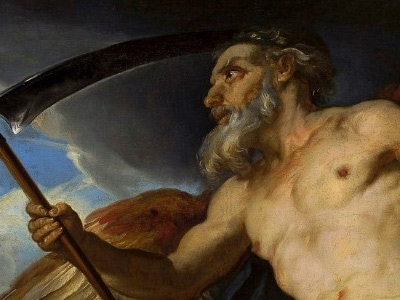 The Greek and Roman God of Time was Cronus. The Ancient Romans saw the wandering stars or planets as gods, although apparently only five planets were known to them at the time: Mercury, Venus, Mars, Jupiter and Saturn. Nevertheless, Uranus, which was discovered and named only in 18th century when telescopes became powerful enough for the job, still mysteriously appears in the cosmological myths as the Father of the Sky.

The God Cronus was identified with Saturn, hence the Roman harvest feast of Saturnalia, and he gave us the word chronology, which relates to the order of Time. Entropy informs us that Time only goes one way, and that it can’t be halted, but like many of the Greek and Roman gods, Cronus incarnated human aspirations, and one of those aspirations was the wish to gain power over Time — perhaps to even stop it altogether.

The task of stopping Time was taken up by Cronus. First, he looked towards his Father, Uranus.

If he could prevent his father from bringing forth children, the cycle of birth and rebirth would be stopped. So he castrated his father (understandably, one of the Greek’s most heinous acts), and sat back, satisfied that he was the sole descendant but forgetting that Gaia, the ancestral mother, would continue to give birth. When she did, Cronus imprisoned her children in Tartarus, the abyss of perpetual darkness. No light meant no sun, and no sun meant no time, so Cronus thought he’d cracked it. But he had overlooked the reality of his own existence, and his own potential progeny.

With his head now firmly buried in the sand, Cronus took a wife, Rhea, and founded a new Kingdom. Things went well, at first, until Rhea decided that she too wanted children. Foiled by nature, Cronus watched in horror as Rhea gave birth to the future. Desperate, he took away her children and devoured them. Only the third remained alive. His name was Zeus, and Rhea was determined he would live.

She hid him from the clutches of his father, suspended him, as legend goes, between the earth and sky, where Cronus would not see him. When Zeus grew to manhood, he knew that order had to be restored. He challenged his father, Cronus, forcing him to regurgitate the past. He was, effectively, setting the clock back in order, and all that Cronus had devoured was restored, including Rhea’s other children.

All this marked a new era in the universe, and the gods that followed Cronus were the gods of humankind. They were the Children of Zeus: Hermes, Apollo, Athena and the Muses, and they signified our acceptance of Time, and the start of civilisation.

Cronus was, in the end, a bit of a rebel. But he was also in some way a victim. He embodied the ravages of Time, and the destructive power that it wields. We are all the victims of our past: each of us devoured by the older generation or perhaps, a past mistake. Cronus walked the Earth a while in the robes of Father Time, appearing every New Year’s Eve before the clock struck twelve.

But when the chimes had sounded, he would slip discretely out, returning as a child. Thus are the clocks of Time kept orderly. One way only, says Old Father Time, and we are bound by nature to respect him. Dutifully we raise our glasses up when the chimes of twelve have sounded, and we’ll drink a toast to Cronus — to his folly and our fate.