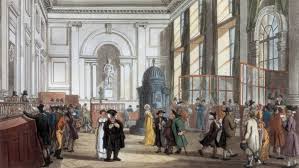 It is hard to believe that for hundreds of years the national method of accounting carried out by the London Treasurer consisted of taking a length of wood and cracking it in two.  At first sight, wood cracking hardly seems a proper way to run a national banking system, but then again, wood is thicker than paper. We tend to think of paper money as representing something real, but in fact it is nothing other than a symbol, and what it stands for in the end is credit.

What is credit? The dictionary defines it as the ability of a customer to obtain goods or services in advance of settlement, based on the trust that payment will be made in the future. It is also defined as an entry recording a sum received, listed on the right-hand side or column of an account, wherein ‘the columns should be added across and down and the total debits should equal the total credits’. Credit, and debit its counterpart, lies at the heart of the mysterious world of banking, barely accessible to mere mortals, who must strive with their credit scores to be worthy of the debt they may accumulate – and most of us have a certain amount of that, whether it’s a mortgage, a simple bank card or a loan.  In fact most money that we use these days is virtual money.

Money has become a swipe across a screen, a chip inside a phone. We hardly like to keep it in our pockets or our purses anymore, and it could be that the purse will soon belong in a museum, the ancient relic of a time when people actually touched their cash – or should I say the cash they think they own, for there is barely any ownership where money is concerned. Money has really only ever been a promise, and the beneficiary of the promise holds it as a credit against other goods or services he needs or wants or asks for.

The Bank of England was founded in 1694, and right up until 1834 the method of accounting for credit and debt was the wondrous tally stick. The system was quite simple; payments were notched up on a long wooden tally stick. The sticks represented the credit and debit sheets of the national bank’s transactions, with the name of the debtor inscribed on the top. The stick was then split down the middle. One half became the stock, the other was the foil. The debtor kept his foil; the bank held the stock. These words have survived to present day, although of course the tally stick has not.

Considered, in the end, as something of a dinosaur by the Treasury, the tally sticks were eventually replaced by paper. How then, to dispose of all these sticks once they had been abolished? The City was in modernising mode, and the sticks, ancient relics of a primitive technology, were clearly not considered worth retaining for posterity. There are hardly any left these days; some exist in private collections but the vast majority (and there would have been many hundreds of them) were thrown onto a fire. And not just any fire.

In 1834 the Palace of Westminster was a very different building to the gothic work of architecture it is today. There was the Hall, the House of Lords and St Stephen’s Chapel, where the debates of the Commons were once held. But when instructions were given for the tally sticks to be burned, they were thrown into a furnace in the House of Lords, evidently by the handful since the flue at length ignited and a fire raged throughout the Palace site, destroying the entire building. From these ashes rose the Houses of Parliament, clearly retaining a memory of heat somewhere in their mortar, or so it now seems.

Interesting too, was the reaction of the watching crowds out in the streets of London when the building was aflame. ‘There go their acts,’ said one fellow, with a gleam of satisfaction in his eye. History reports that people watching on were ‘more pleased than sorry’ at the flames. Ah, you have to love those little historical details. Perhaps the crowd’s reaction was a bit exaggerated. Then again, perhaps not.

I’ve been busy lately working on a new book, so the posts have been less frequent. More about that soon, but meanwhile next month I’ll be back with more entertaining history… see you then!