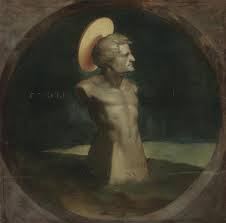 Terminus, the Roman god of milestones, must have seemed a fairly useful god. He was the god of boundary markers, and he appears as a human head and bust on top of a column of stone: a deity in manly form emerging from the marker between two people’s land. He was concerned with divisions of territory, and upsetting him in Roman times would have incurred severe punishment — often death. Boundary disputes between neighbours thus once had divine connotations, which made the disputes simpler to resolve in early Roman society. Later, the law of the land took over and Terminus became a redundant god.  But what he represented was a means of controlling our most basic driving force: our territorial instinct. We share this instinct with every creature on the planet.

Birds sing to enforce it; mammals fight over it. In humans this instinct has evolved into complex social forms, one of which is politics. Today we use politics to assert our territorial instinct. We find it hard to stop ourselves from jealously guarding our boundaries because instinctively we feel safer doing so. We no longer have Terminus to help us and so we make war instead, or invent a political party that will take over his role. Terminus may have been a good solution to an age-old problem. Should he be resurrected?

The trouble with gods like Terminus, is that they reveal something very profound and flawed about the nature of gods in general and by extension the nature of religion. Useful as he may have been, Terminus was a construct, a vehicle for our instincts. He did not survive as a god because his divine power was undermined by the same instinct he was meant to serve.

The god of boundary markers goes back a long way, and was probably a Roman god even before Rome was built. His shrine lay under the most important Roman temple on Capitol Hill. When Rome the city was founded, Terminus was charged with its protection. He was the one who would mark out the boundaries of the Roman Empire that was to come, laying down his post markers over almost a third of the known world.

This was all pretty impressive, but ultimately, in the end, it was mostly abusive. As Rome’s expansion gave way to greed and corruption, Terminus’ status became, by association, equally corrupted. He was bound to stand for Rome’s greed, its violence and in the end — since evil consumes itself, its demise.

What lessons may we draw from Terminus’ legacy? Although he has faded into antiquity, the issue of boundaries continues to plague us. Today Terminus has become a terminal point, mostly connected with travel. He silently marks the crossover point between two places or multiple countries at the terminal of an airport. On a positive note, even as an adjective, terminal does not mean the end of one thing any more than it signifies the beginning of another. We often forget that the boundary marker is a construct, in the same way that Terminus was a construct.

Should we see his legacy in this light? In a world where people are forced to flee their land because of war and trouble, sharing our own land and space has become the challenge of our time. If Terminus shows us anything, it is the danger of the marker, the warning of the construct of a god.