The Fall of Constantinople - and what it really meant - Lucille Turner

The Fall of Constantinople – and what it really meant 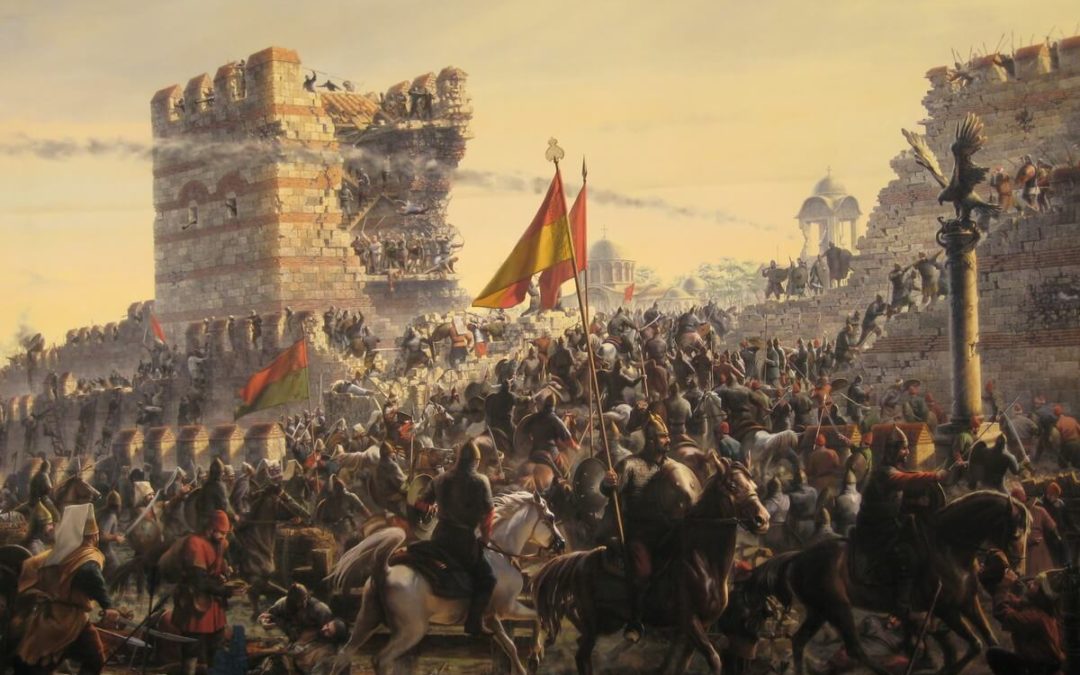 Present-day Istanbul was once called Constantinople, and it was in Greek hands until it fell to the Ottoman army in 1453. For centuries the city was the principal capital of the Christian world, until Rome replaced it little by little, exerting its power through the Pope. It was named for Constantine the Great around AD 330, and he was the first Roman emperor to convert to Christianity, finally bringing an end to the bitter persecution of Christians throughout the Roman Empire. But although the city was Roman, it was also Greek, and the focus of Greek Byzantine culture, and the difference between the two: Roman and Greek, soon became clear.
SMXLL​​
The Romans had a habit of doing the things other people only talked about, which was partly why they were so successful. The Greeks conceived of democracy; the Romans put it into effect by founding the first Republic. The Greeks conceived of great cities through classical architectural design; the Romans built them. The Romans were great pragmatists, the Greeks great thinkers. And this caused problems once they united under the ensign of one religion: Christianity. It lay at the root of what is still called The Great Schism, when the Christian world became forever divided by disagreements over the Word of God. These disagreements were never cleared up, and because of them, Constantinople became Istanbul.
MXLLS​​
​​Very soon after Constantinople was founded, the Greek way of thinking began to differentiate itself from the Roman one. While ancient Rome was a formidable force in the world, Romanising one fifth of the world’s population at the height of its power, and joining it together with 80,000 km of roads, the Empire was also a power-thirsty machine that eventually imploded.
Nevertheless, it continued to thrive indirectly through Catholicism, the very religion it had once persecuted, and which now became its principal means of influence throughout the world – for better and for worse. But the division between Greek and Roman continued to deepen over the Word of God, and the interpretation of Scripture.
SLXLM​​
MXLLS​​
The rift had begun to form since AD 325, at the first Council of Nicaea. Everyone was there, even the British. But the real bone of contention was between what became the Church of Rome and what was then the Church of Alexandria. The Latin (Western) clergy considered Christ to be more human than divine (which is interesting when you consider that Christ was crucified on Roman soil) while the Eastern, Orthodox clergy considered Christ as more divine than human. ​​These may seem like minor points to some, but they were fundamental really, and irresolvable for generations.
For centuries too, the taking of the city of Constantinople, the metropolis of Byzantine Greece, was considered almost impossible. The city walls were formidable: 40 feet high by 15 feet thick, but first the invading Ottoman army had to get to them. And that was no mean task either because the Greeks had hauled a great chain beneath the surface of the water across the mouth of the Bosphorus straits to prevent an army from landing men directly at the foot of the citadel walls. Armies quailed before its wall; ships floundered in the straits. Nevertheless, the Ottoman army conquered the city, walls and all, sending a shock wave rippling through the Christian world — because even though Western Christendom had as good as abandoned the Eastern Orthodox Patriarchate to its fate, nobody apparently really believed that the city would ever fall. Or did they?
SLXLM​​
SXLLM​​
When the time came for a show of hands in support of the Greeks, the Pope did not give Constantine XI, the last emperor of Constantinople who was named for its founder, the support he needed to defend his city from the Ottoman army. One could almost say that it boiled down to this: if you want our support, it must be on our terms. The clergy, of course, refused to budge on either side, and as a result, thousands lost their lives, including the Emperor Constantine XI, who died defending his city at the gates in the uniform of a foot soldier. ​​It was a tragic day in the annals of Greek history, and a day that is still remembered by many. And even though it happened over five hundred years ago, five hundred years is not that long ago in the grand scheme of things.
The fall of Constantinople had the effect of destroying one half of the body of the Christian Church, the Eastern half, and leaving the Western half in a position of greater power. This was the tangible outcome. From that moment on, Constantinople became Istanbul, and the fate of the city changed forever. The loss of the Greek Orthodox influence on the Christian Church meant that the Catholic Church enjoyed a period of hegemony, interrupted only by the Reformation. The final blow to the Byzantine Greeks had been delivered, and the unity of the Church, which had always been compromised by old theological disagreements between the Eastern Church and the Western one, was now assured — at least until the rise of Protestantism.
​
MXLLS​​
​How might the world have been different if the city of Constantinople had not fallen, and the Patriarchate had remained? It is hard to say, but the legacy of the Greeks was not forgotten. It gave rise to the European Renaissance, inspiring generations of scholars to challenge old beliefs and find new answers to old questions, such as, what is mankind’s place in the grand order of things?
From then on, science began to answer them.