Many things influence our lives: the people we meet, the place in which we live. For an artist, such influences affect how they see the world and make it into art. Both people and place influenced the life of Sandro Botticelli, another great painter of Renaissance Italy alongside Leonardo da Vinci. It is certain that the two men would have met; perhaps they were even close friends. When Leonardo was working as an apprentice around the age of 16 in Verrocchio’s workshop, the centre of Florence’s art in the 1460’s, he would have had occasion to meet other young artists, apprentices like himself. Botticelli was older than Leonardo by several years, and their characters were very different, right from the start. How were they different, and how did it affect their work? 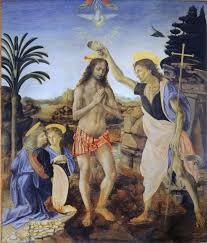 Verrocchio’s workshop, which once stood on the corner of present-day Via de’ Macci in Florence (a fact I discovered after intensive research at the National Library of Florence) is now a run-down café and empty storehouse. Times have changed. The ring of hammers and fizz of soldering irons that would once have seeped from the famous workshop has been replaced by the whir of the espresso machine. But if you pause there for a moment you can still imagine what it must have been like to work for the man who could open the doors to the Medici powerhouse.
Verrocchio was known above all for his sculpture, but he was also a great artist in his own right. Leonardo learned an enormous amount from him, and probably saw the master craftsman as a kind of father figure, or at least as the man who kick-started his career. Without the influence of Verrocchio, Leonardo could have ended up drafting contracts in a corner of his father’s notary office. Instead he was swept into a world he loved, and into a craftsman’s guild that saved him from the obscurity of his illegitimate birth and poor education.

Now that he had made it into the fold, Leonardo had to prove himself. It was during the painting of The Baptism of Christ, a work attributed to Verrocchio but certainly shared by his apprentices as a study, that Leonardo made his impact. At that time there was another youngster working there beside him, a sensitive, graceful youth with fair hair and slightly dreamy hooded eyes. He would have made a very physical contrast to Leonardo, who was certainly darker, probably leaner and doubtlessly more intense. But it was not only their looks that formed a contrast. Their style of painting too was different and Verrocchio, as he observed them from his master seat in the workshop, must have seen it straight away. As if determined to set them side-by-side, so that one could learn from the other, he gave them a task — one angel each. Leonardo was to paint one of the angels in The Baptism of Christ, while Sandro Botticelli would paint the other.
The result, when you look at it, is interesting. One angel is more static and flat; the other seems to move in another dimension within the canvas, reflecting greater light. Leonardo’s angel seems more alive, more divine. Still, there is a pathos to Sandro Botticelli’s angel that may reflect his personality and contrast to the drive and intensity of Leonardo’s hand, even then. How did things evolve after that?
One thing to remember when you compare the two men and their work, is that Leonardo went on to become Renaissance Man, Sandro did not. By Renaissance Man I mean that Leonardo, in the true spirit of the Renaissance ideal, went on to study everything. He became not just an artist, but also an inventor, a natural scientist, a kind of physician, a philosopher, an engineer and even a sculptor, for a while. Sandro Botticelli, on the other hand, remained simply an artist. He even went on to open his own workshop, producing statuettes by the dozen for the masses at one point, but also producing what is arguably one of the most beautiful mythological paintings ever gazed upon: Primavera, Spring. 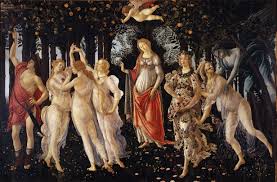 Sandro’s style could be called incomplete or it could be called poetic, but however you see it the result was very different to Leonardo’s work because of the kind of free-handed style Leonardo used to develop the figures in his paintings. Leonardo’s work had realism, spatial depth and intensity of light and shadow. Botticelli’s paintings still lay on the edge of realism. They were more stylised, less three dimensional, less real. But that didn’t make them less remarkable or less beautiful, depending on how you qualify beauty. Because of this lack of realism, Botticelli’s style has often been called idealistic. If the style reflects the character of the man, it could well be true.
Later in the 1490’s, when Leonardo returned to Florence after a long period of absence in Milan, he would have found it greatly altered. Florence was in the grip of Friar Savonarola at the time, a crazed zealot who believed that the people of Florence should atone for their sins by burning their most precious possessions on great fires he had built in the Piazza della Signoria, known as the bonfires of the vanities. The people of Florence were, he said, essentially damned.
It seems incredible to us now that people could believe such things, but then there have always been those in the world who are vulnerable to fear, and there still are. Sandro Botticelli, who had remained in Florence all this time, was severely affected by Savonarola’s vitriolic preaching. He fell into depression and became interested in Dante’s vision of hell. His sketches reflected this. They are the visions of a tortured mind, and a far different cry from the ephemeral beauty of the three graces of Spring.
It is likely that Leonardo remained a close friend of Botticelli, perhaps helping him through this difficult period and keeping him safe from his demons. Leonardo himself was a deeply religious man in many ways, but he was not a dogmatic one. He saw God in Nature but he did not fear God. His religious representations are framed by nature; they rest in nature’s cradle, not in the hand of God. 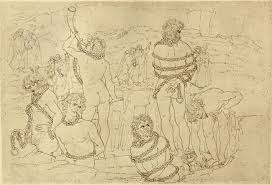 Even if Leonardo managed to help his friend get over this difficult period of his life, Botticelli never returned to the idealism and beauty of his earlier classical work. For Botticelli, classical mythology became replaced by more religious subject matter, and thus it continued until his death in 1510. Religious fervour had seeped beneath his skin; no amount of pigment, not even Leonardo’s, would paint it away.