The Dawn of Language by Sverker Johansson - Lucille Turner

The Dawn of Language by Sverker Johansson

Who spoke the first words, and what were they?

Why are humans the only animals that can speak a complex language?

Why is the origin of language so elusive?

These are some of the questions answered in this new book about how we came to talk, by Physicist and Linguist Sverker Johansson.

There have been numerous experiments during the last century to try to understand whether humans are indeed the only animals capable of spontaneous linguistic communication; some of these have involved a tapping horse called Clever Hans and others a bonobo called Kanzi, who handled telephone conversations. But there are problems. Clever Hans was looking for cues and acting on them. There was no real spontaneity. As for the bonobo, he was being hothoused. It is certainly possible to teach a chimp how to communicate at a higher level than it would normally manage, but the process is unnatural. We can wax lyrical about animal communication skills until the cows come home, but the fact is that a requirement for a certain level of linguistic complexity has to be in place before a language becomes exponentially complex. As Author Sverker Johansson points out, ‘no-one has ever seen a chimp in the wild frying an omelette or making a stone knife (or playing Pac-Man)’. Johansson, Doctor of Philosophy in Physics and Master of Philosophy in Linguistics, has been working on the origins and evolution of language since 2006. The Dawn of Language is a wide-ranging, scholarly book that examines the subject profoundly but eloquently and with moments of humour, in a way that is accessible to anyone who has an interest in the subject and wants to further his/her understanding of anthropology and linguistics. 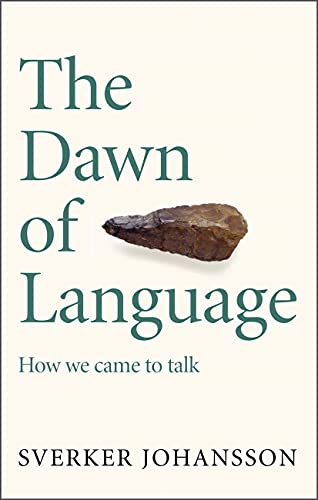