DAUGHTER OF THE REICH, by Louise Fein - Lucille Turner

DAUGHTER OF THE REICH, by Louise Fein

Impossible love against the backdrop of the Nazi regime

Author Louise Fein writes …the inspiration behind Daughter of the Reich was my father, who came to England as a refugee from Nazi Germany in 1933. He grew up in Leipzig, where the book is set, and although the story itself is fictional, all the events and incidences in the book are based around real events. My father never spoke of his life in Leipzig and he died when I was only seventeen so it was always something I wanted to explore. In researching the book, I travelled to Leipzig and was lucky enough to have access to some family archives.

An engrossing and enjoyable book that resonates with the author’s own experience of her family history, Daughter of the Reich is about what happens to people when they become the victims of manipulation as a result of propaganda. Hitler’s Germany provided humanity with a dangerously successful example of large-scale manipulation and indoctrination. It succeeded in convincing large swathes of its population, including its armed forces, of the validity of Hitler’s anti Semitic policies and his own particular variety of megalomania, and the characters in this book are likewise swept up by the fervour, to the ruin of all.

This is primarily a story of impossible love, but romance is not the only driving force behind it. There are questions, profound ones: How was it possible that fathers could turn into sadists and soldiers could turn into murderers? How could a child be made to turn against his family, and how could a daughter absolve her parents from the sins that they commit in the name of the fatherland? Highly recommended… 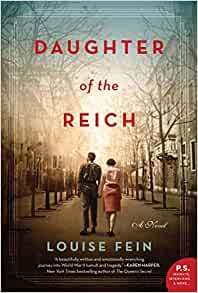