A Sketch of Leonardo - Lucille Turner

A Sketch of Leonardo 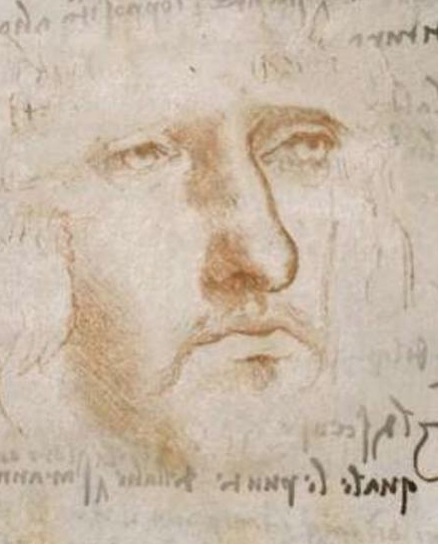 Leonardo da Vinci was a major player in the evolution of human understanding.  Few men incarnated such a strong, early connection between art and science as he did, and yet Leonardo painted relatively little. Much of his time was spent on invention and discovery. And as with everything he set his mind to, Leonardo was the kind of man who left no stone unturned. He was obsessive to such a point that he was almost unemployable. The Medici commissioned work from him, but they were lucky if he completed it. His painting of Saint Jerome in the Wilderness was left unfinished. The Adoration of the Magi was abandoned. His fresco of The Last Supper was applied almost as an experiment, and the mixture started crumbling soon after it had dried. His patron at the time, the Duke of Milan, must have wondered what kind of an eccentric he had taken into his court. Was it because Leonardo’s mind was so charged up with ideas that he couldn’t wait to move on to the next thing? Or did he have his own ideas about what is finished and what is not, which contrasted with those of others? The difficulty in forming judgements and coming to concrete conclusions about Leonardo the Polymath and his incredible range of work, is that we know so little about his personal life. There are gaping holes in the story of it, which we can only attempt to fill by examination of the work and writings he has left us, and by conjecture.

A popular personality at court, Leonardo must have been keen to oblige other people up to a point (and particularly if it fell into the category of one of his pet projects); he did try to satisfy the demands of the Duke of Milan by sorting out his hot water issues and designing a few rather radical bits of artillery to face the marauding French, but he always had his own projects going on in the background, and he always had his own rather special way of working on them. There were days when he would walk up to a painting, stand before it in silence for the best part of the day without picking up tools, then leave. ‘What exactly are you doing?’ people asked him. ‘Working’, he cryptically replied.

So much has been written about the discoveries of Leonardo, his work, his inventions and his notebooks but he remains a mysterious figure, probably because he have not seen the like of him since. Is it possible to piece together a picture of his character? If you could sit down and have a conversation with Leonardo the man, how would it go? Would he be taciturn or engaging, difficult or genial…  Sketching anyone’s character, as psychologists maintain, requires an understanding of his or her early life. The growth of personality is said to occur at a very early stage of our lives. What can we gather from Leonardo’s early life that might give us an insight into the man he became? Well, we could take a look at his handwriting, for a start.

Today a person’s script is of limited importance. Largely abandoned in favour of the keyboard, these days the hand-written word is of no greater significance than eye colour, or hair colour. In fact it is becoming obsolete. But at a time when the written word was the only means of mass communication, it attracted more attention. The script of Leonardo, written in reverse with the left hand, was dramatic. Not only did it appear to bear the hallmark of the devil, with its connotation of ‘sinister’ originating from the word for left in Latin: sinistra, but it was illegible without the aid of a mirror. It was, as a result, largely unpublished and undecipherable. Why did Leonardo write this way?

Some have said Leonardo’s script points to Dyslexia, and that is very possible. He had spatial vision, defined by shape, and dyslexic people also see things spatially; they rarely think in a linear fashion. This might even explain why Leonardo did not think of things as ‘finished’ in the traditional sense; perhaps his way of thinking was more like a journey through a vast web of multiple connections than a simple ‘a to b’. He was certainly using more of his brain than we do at any one time; we can see this from his manic note taking.

It is also possible that Leonardo wrote in reverse to protect his work from the eyes of others, in which case he certainly succeeded. It takes effort to read his work, effort and curiosity. The faint hearted will abandon the task fast. Was this his intention? Or did he want to shield his writing from the eyes of the clergy? Although he certainly understood that heresy was a dangerous word, he probably did not see himself as a heretic. Nevertheless his ideas challenged church doctrine in ways that ran deep — an inevitable consequence of the power of natural science in confronting dogmatic thinking.

So, Leonardo’s work was almost always work in progress. Was he a procrastinator or a perfectionist? Probably the latter. Either he did a thing his way, or he didn’t do it at all. In the end, people shied away from commissioning him with work. You can almost hear their voices: don’t give it to him if you want to see the end of it. It probably upset him and it certainly drove him out of Florence. What’s more, it did nothing to help his finances. Poverty dogged him for much of his life, pushing him into the clutches of people like the Duke of Milan, and Cesare Borgia, both of them demanding, difficult and dangerous men. He swam against the current of his day because he attempted to understand the order of the world empirically, rather than in creationist terms, and his work was not always sacred enough for the standards of his time. He was almost excommunicated at one point for carrying out dissections on human corpses, and that would have meant even fewer commissions.

However, I suspect that if he were alive today, Leonardo would be pleased by the way he is remembered. A little astonished, perhaps, that Mona Lisa is so popular, but then he did spend some thirteen years working on her. Did he ever draw a line and call it done? I doubt it; he probably just ran out of time. Nobody is immune to the ageing process, not even Leonardo. The final entry in his journal says it all. I must go now, the soup is getting cold…