A Short History of Ideas – Revolution 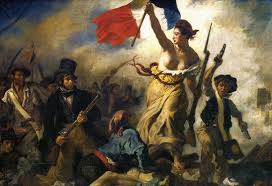 As an idea, revolution is an inflammatory concept. It sets in motion violent change, irrespective of the outcome. Most famous of all revolutions was the French Revolution of 1789. It was not the first; human history is marked by rebellions, revolutions and revolts, and most of them bloody, but what made the French Revolution unique was the sheer scale of its outcome: the sun at last set over France’s absolute monarchy and its feudal system was finally abolished. The declaration of human rights was enshrined in the constitution and the legal system was reformed. All this is very praiseworthy, but it did come at a cost. Revolution makes waves, and the waves turn into ripples, both social and political. The French Revolution also gave birth to the idea of ‘left’ and ‘right’ in politics; you were either for the revolution or against it — right for the nobility, left for the rest. This divisive way of seeing things is just one ripple from the wave that continues to wash through French society some two hundred years on. Another was the one that stemmed from violence. Violence characterised this revolution as it tainted many others, and violence is rarely positive. But did it have to be that way? Was the terror really unavoidable?

At the heart of French revolutionary debate — in the early stages at least, were two men: Montesquieu and Rousseau. Each had their own ideas about how revolution should be achieved but both men felt that the days of the absolute monarch, not only in France but as a concept, had run their course. Power in the hands of just one man was outdated; the time had come to share it with the people, but how was this to be achieved? Montesquieu advocated a constitutional monarchy, more along the lines of the British monarchy, while Rousseau wanted a Republic.

The huge amount of guillotining that went on over such a short period of time certainly lent efficiency to Robespierre’s Terror, but change could have been peaceful if Montesquieu’s thinking had only been viewed in the light of compromise before it was too late.

Compromise is a wonderful thing. It is defined in the dictionary as “a coming to terms, a settlement of differences by mutual concessions”. It should be easier to engage in than violence but it doesn’t seem to be. When Louis XVI sensed the first waves of revolutionary thinking, he feared that he would have to share his powers with the aristocracy, and initially tried to loosen his ‘culottes’ a little towards the French Parlements, which were run by the nobility and had influence over matters such as taxation and law. He agreed to lower taxes, but then went on to demand that the nobility should start paying theirs. The nobility, who enjoyed enormous wealth and privilege, including exemption from taxation, were not amused. What would be next, they must have pondered. The abolition of their lucrative fiefdoms? The loss of their swords and status? The outcome of this was that reforms simply did not happen. Revolution continued to be fomented beyond the palace doors; the monarchy continued to be perceived as absolutist. The French aristocracy’s inability to reform their ideas guaranteed their place on the podium of the guillotine, and Robespierre proceeded with his own brand of inflexibility from then on. Reforms are still fiendishly difficult to implement in France.

Did Rousseau also advocate zero compromise? He does remain France’s greatest philosopher. Rousseau was certainly an enlightened thinker, and a man of some compassion, but he was disappointed by what he saw inside the hearts of others. “All my misfortunes,” he said, “come of having thought too well of my fellows”. Still, he must have seen it coming in 1755 when he penned his Discourse on Inequality. “The first person who, having enclosed a plot of land, took it into his head to say this is mine and found people simple enough to believe him, was the true founder of civil society”. The words continue to have meaning in France, where more people rent than buy their property, but whether you agree with Rousseau or not, if compromise had been at the top of everyone’s agenda at the time of revolution, and on both sides, the decades of war that came afterwards in Europe as France tried to spread its revolutionary ideals, would probably never have happened.

The Prussian war, perhaps, would probably never have happened and it could be that the wave of wars that came afterwards may never have been set in motion.

The violent ripples of revolution take a long time to die down. Regrettably, perhaps they never do.