A Short History of Ideas – Halloween 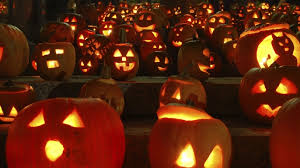 In England, Ireland, Scotland and America we celebrate Halloween on October 31st with little understanding of the origins of the festival. Halloween is part of our culture, so we celebrate it as a matter of course, and like many other traditions we are attached to, Halloween is pre-Christian. The old Celtic festival of Samhain is its predecessor, and if we were to celebrate it as it was originally conceived, Halloween would probably be very far from the ghoulish parade we have come to expect. In fact, according to the original beliefs of the British Isles in pre-Christian times — and even before Britain fell under Roman control in the first century AD, Halloween was more like a celebration of reincarnation. The originators of the festival of Halloween were the druids of Britain and Ireland, whose beliefs were close in some ways to those of religions such as Hinduism. Convinced that the human soul was immortal and would be born again in physical form, the druids and the Celtic tribes they led were unafraid of death; to them death marked the start of another journey, it did not mean The End.

With so many centuries of Christian thinking behind us, it may come as something of a surprise to hear that reincarnation lay at the core of Britain’s oldest religion. But Samhain changed after the disappearance of the ancient Celts, leaving us with a festival that is dark and frightening rather than one that is actually rather comforting. Reincarnation, then as now, still has at its core a form of moral accountability. Mistakes made in one life must be repaired in the next, but at least there is a next. It could be that the idea of ‘trick or treat’ on Halloween comes from this principle of cause and effect. A trick follows a bad deed; a treat rewards a good one. In Ireland the trick or treat habit is particularly strong, and Ireland has deep Celtic roots. Another Celtic relic of Halloween is the wizard and the witch. Both these figures recall the druid and druidess of Ancient Britain, and they have lingered particularly strongly in the British psyche.

Witches, the staple of Halloween, have been demonised over the centuries, taking the form of old and evil hags instead of the wise women they might have been in the days of the Celts. They persisted even into the seventeenth century in England. They were known as cunning folk, or healers. The evil reputation they have acquired since is more the result of the associations imputed to them by the Church than anything, and it would have been very rare for a witch or wizard to engage in dark magic. I don’t deny that it is probably more fun to dress up as a hag at Halloween than as the good witch of the west (depending on how much make-up you need to apply) but how did the old Celtic Halloween festival differ from its present day counterpart? Can we revive it as it was, or has too much dark water flowed under the bridge for that?

The festival of the last night of October was certainly perceived in the ancient customs of Britain and Ireland as a moment of entry or departure into the Otherworld to which we travelled after death but the druids, who were the spiritual leaders of Britain at the time, would not have seen this as a bad thing, because the ancestors were always close in any case; those who had gone were never really gone. They may have slipped behind the veil of the Otherworld, but that did not mean there was no way back. On the dark night before the first of November, fires were lit in Ancient Britain. We have displaced this tradition to bonfire night, but the sparks that lit the sky from the fires of the Celts were made for other reasons. They were beacons of hope, signals to the Otherworld. Distributed in torches throughout the settlements they would have lit a way between two worlds, this one and the next. As the door to the Otherworld opened on November’s eve, the flame marked the route, and the remembrance was complete.

It was only later, as Christianity gained ground, that the old pagan festivals were altered by Christian ideas and given new form. Christian saints, not druids, took over as the guardians of the Otherworld, and All Saint’s Day was celebrated on November 1st. Even the vampire of Halloween, perhaps the most terrifying of all, has a history of magic more powerful than its bite. Viewed as shamans in Romania, the vampire’s association with blood postdates Christianity. The original vampire myth reveals the vampire as a living person, whose quest for reincarnation has led him astray. Bram Stoker, with his novel Dracula even had him landing on the shores of Eastern England. Clearly, the Halloween line up is not quite what it seems. So whatever spirit lights your flame this November, be it saint or myth, fiction or druid, perhaps a new act of remembrance is called for — as the creepy figures that lurk in the shadows on October 31st are probably just our ancestors.

Read the truth behind the vampire myth at Halloween in

The Sultan, the Vampyr and the Soothsayer MORE HERE